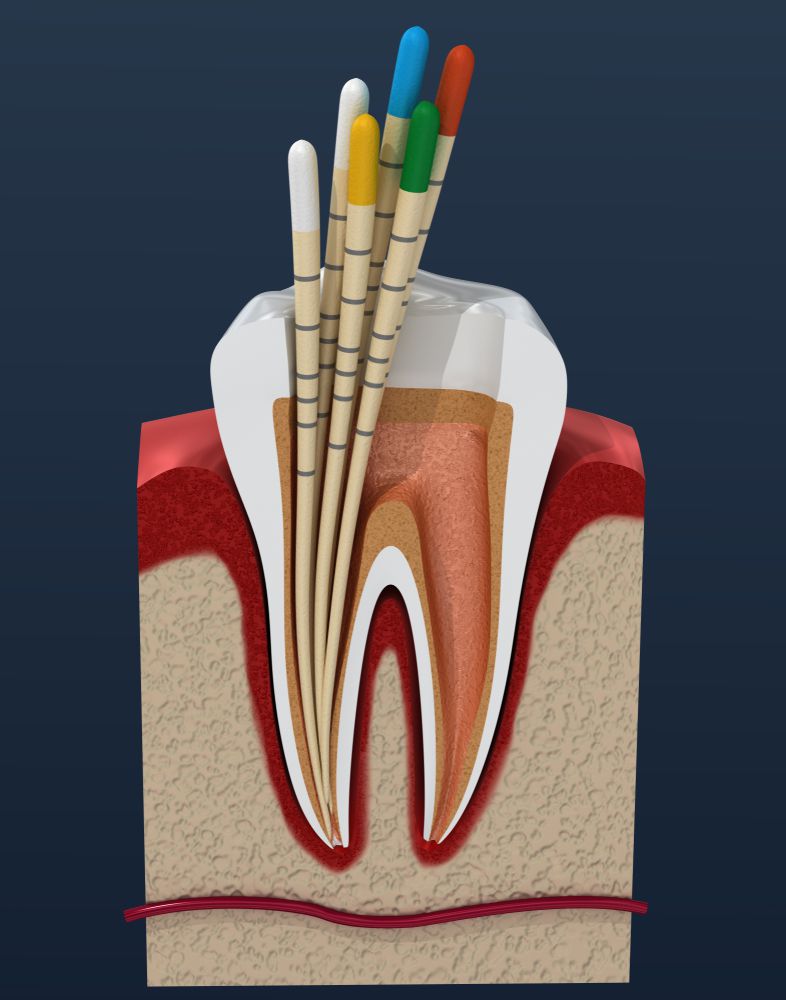 The material used to fill the space after root canals are cleaned and disinfected.

The material used to seal a root canal is gutta-percha. Gutta-percha is a rubber-like compound used for decades to fill root canals and for other medical purposes.

A root canal treatment involves removing the pulp and biological material within the tooth and filling it with gutta-percha. The procedure can be performed on single teeth or multiple teeth. After the gutta-percha has been inserted into the tooth, it’s heated or cooled to harden it, then sealed with a crown or filling.

Filling a root canal begins with numbing agents applied to the area around the tooth to reduce any discomfort that may occur during treatment. The dentist then drills into the tooth and removes any damaged material from inside it before cleaning out all debris inside your mouth, so there aren’t any contaminants left behind when filling occurs afterward! The next step after cleaning out debris is placing a temporary filling into your mouth until a permanent one arrives later on down the road!

Bioceramic-based root canal sealer materials are one of the newest technologies in endodontics. These materials are biocompatible and promote bone remineralization by stimulating physiological responses. They also enhance the release of anti-inflammatory cytokines in the PDLSCs.

These materials are available only in endodontic offices. They are considered a beneficial technology in endodontics. Bioceramic refers to materials created specifically for medical use, such as zirconia, alumina, bioactive glass, and calcium phosphate. The bioactive elements in bioceramic materials encourage the growth of tough, durable tissues.

In vitro studies of root canal sealer materials have examined their physical properties and biological features. They also evaluated their cytotoxicity and biocompatibility.

An essential aspect of methacrylate-based root canal sealers is the antibacterial effect. This effect is particularly important because microorganisms such as bacteria are often the culprit of persistent apical periodontitis. Several studies have investigated the antibacterial properties of DMADDM. A current study aimed to develop an antibacterial root canal sealer. Different mass fractions of DMADDM were incorporated into EndoREZ and evaluated for their cytotoxicity and apical sealing ability.

Researchers have studied the solubility of various root canal sealers in chloroform and eucalyptus oil. The sealers were poured into standardized samples and immersed in these solvents for 30 seconds, five minutes, and 20 minutes. The solubility was then determined using multiple paired t-tests.

Zinc-oxide-based root canal fillers contain zinc oxide powder and calcium hydroxide or bismuth subcarbonate. They are resorbable, which is suitable for sealing close to vital structures. These sealers also have good antimicrobial activity.

In vitro studies have evaluated the physical and biological features of these sealers. They have also been tested for cytotoxicity. Nevertheless, more studies are needed to establish the sustainability of root canal filling sealers. In vitro testing has also shown that zinc oxide-eugenol-based sealers offer the lowest microleakage.

The primary purpose of root canal sealers is to fill irregular gaps in the root canal system. Therefore, it is vital for them to exhibit low solubility and disintegration. Dissociation of Ca(OH)2 would compromise its favorable effects on the body. However, calcium hydroxide-based sealers display good sealing ability and are biocompatible with bacteria.

Calcium hydroxide is a biocompatible material that promotes the formation of tooth tissue and the biological sealing of the apical foramen. However, spreading calcium hydroxide within the root canal is difficult due to its insoluble nature in water. Root canals are complex, with several canals per tooth.

Root Canal Surgery on the End of a Root A root canal is often the preferred treatment for an infected tooth. The tooth is opened,

How to find a Good Endodontist Near Me

Introduction Finding the best endodontist near me is not an easy task. Several factors must be considered before selecting the right one for your root

Introduction A root canal treatment aims to remove tooth pulp and clean the inside of an infected or damaged tooth. The procedure is usually performed

What is Root Canal Treatment?

Intro Root Canal Treatment Procedure is used to treat a diseased or injured tooth. The term “root canal” comes from the hollow space inside a